COUNCIL OF EUROPE MISSION TO VISCRI 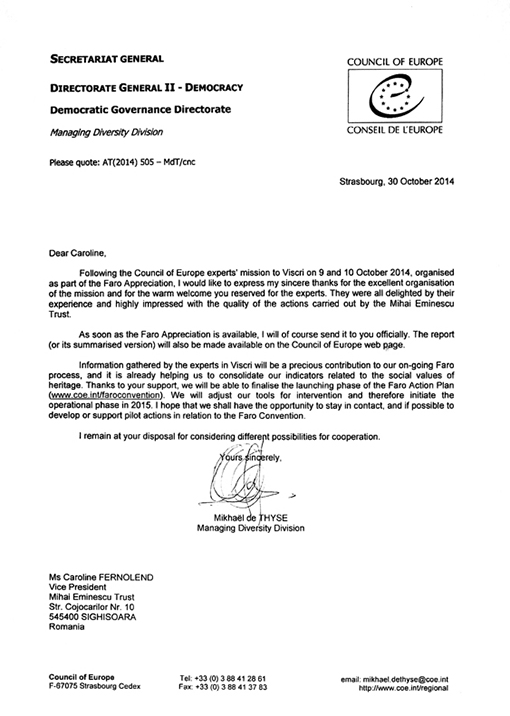 To view as PDF: See 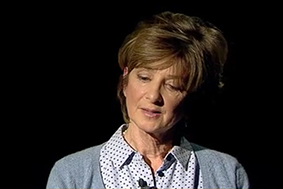 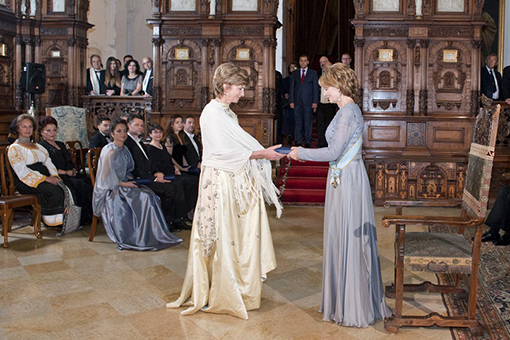 At a ceremony held in the Hall of Honour at Peles Castle near Sinaia, in Prahova County, Jessica Douglas-Home received an award of Knight in the Order of the Crown from His Majesty King Mihai I of Romania. The presentation was made by HRH Crown Princess Margarita on behalf of the King.

The Trust thanks Professor Colin Leach, Professor Roy Foster and David Wiggins for their wonderful donation of history, biography and reference books to the Apafi Manor library. German volunteer students from the Freiherr-vom-Stein-Gymnasium in Leverkusen helped to sort out the books. The restoration of the ruined house in Richis is proceeding well, due to the skill of the team working with the Trust's architect Noemi Ugrai and project manager Sandel Neagu. Picture shows the entirely new roof. The Trustees took the final decision for the interior and exterior of Richis House and for its cellar. In the loft, new living quarters are being created. The whole MET team travelled to Sinaia, arriving at Peles Castle to attend the ceremony for the award of the Knight of the Order of the Crown.

An ‘Apple Day’ was held by villagers to celebrate the end of the picking season in the orchards of Mălâncrav. There were tours along the ‘Apple Path’, demonstrations of work, and displays of a wide range of fruit, including the old native varieties. A buffet lunch prepared by the ladies of the village was served on long trestle tables with delicious home-made bread, while local musicians entertained the visitors. The day ended with dancing. The event formed part of a two year project begun by the MET and the SAVE foundation from Switzerland in 2013, the aim is to add value to native fruit varieties and to traditional farming methods as a way of achieving sustainable income for rural communities. The project is co-financed by a grant from Switzerland through the Swiss Contribution to the enlarged European Union. 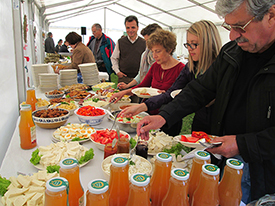 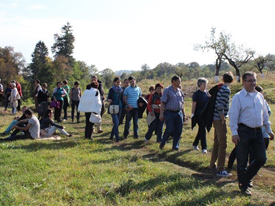 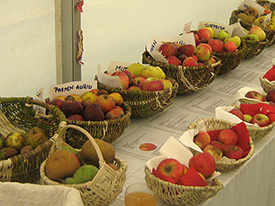 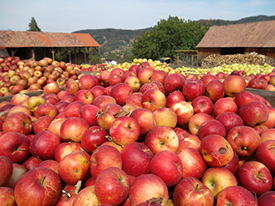 A new documentary film by Tibor Hartel (biologist and adviser to the Mihai Eminescu Trust) explores the agricultural and environmental significance of the ancient wood pastures of Transylvania.

In Eastern Transylvania, in the Székely Land, the Mihai Eminescu Trust and the Plăieșii de Jos villagers celebrated the restoration of the pavilion and its surroundings at the White Stone mineral water spring. Village craftsmen also made direction signs for a walking route to the spring. The Trust, Plăieșii de Jos Town Hall and the local Forestry Association organised the project together with the support of 190 volunteers from the village and with the financial support from the Horizon Foundation.

The award ceremony took place at the Romanian Athenaeum in Bucharest. The Mihai Eminescu Trust received two first prizes, for Environmental Protection and for Impact, in each case the awards were for the MET project A Forest for Every School, developed in partnership with the Accor Hotels group. The specific objectives of the project, which involves 60 schools, is the preservation and expansion of forests, the afforestation of degraded areas, developing awareness through education and the involvement of local communities in planting native trees. In the period 2009-2013, the MET was responsible for the planting of 1,043,225 trees in the counties of Brașov, Covasna, Harghita, Mureș, Sibiu. In addition 40,000 oak seedlings were being brought on in a nursery near Sighișoara.

At a small ceremony marking the completion of the first stage of restoration work, Ioan Dorin Dăneşan (Mayor of Sighişoara) expressed his thanks for the work of the team, and Romanian Director of the MET Caroline Fernolend paid tribute to the longstanding partnership between Shropshire craftsmen and their Romanian counterparts. The Mayor of Sighişoara also renewed his gratitude to the Shropshire benefactors for their 2013 gift of Fire Engines: on Wednesday 14th May another fire broke out in a property above the Butchers' tower. Within minutes the two fully kitted Shropshire Dennis Rapiers arrived on the scene resplendent in their original County livery and dealt with the incident: the engines were a perfect size to get under the archways into the citadel. Previously the inhabitants of the beautiful 17th century buildings inside the walls had been hard to protect because the much larger “Sighişoara Pompiers” could not enter this area. The Butchers Tower bastion is a key feature of the unique and complete medieval defences of the ancient fortress of Sighişoara. Over recent years, localised collapse and cracking of the walling plus erosion of the mortar and tile capping to the supporting walls was threatening its very survival. The repair works led by Colin Richards and the Shropshire team of craftsmen provided a unique conservation skills training opportunity. The MET nominated 6 young craftsmen from the nearby village of Stejăreni who were keen to improve their skills and gain opportunities for employment in the heritage sector. The work involved stone masonry repair, rendering, limewashing, traditional tile roofing and carpentry. After a similar project in 2013, the students from Stejăreni all found employment following their training course with the Shropshire Team.

Specialists from Switzerland and Romania arrived in Mălâncrav this week to give tuition in fruit tree grafting. 45 participants took part in the 3 day course, which took place in the Apafi Manor orchards.

This year’s presentation for 'Friends' of the Mihai Eminescu Trust was held at the Embassy of Romania in London. MET Chairman Jessica Douglas-Home thanked the Romanian Ambassador (His Excellency Dr Ion Jinga) for his support over the years. Marianne Suhr, specialist in the repair of historic buildings and co-presenter of BBC2’s Restoration, quoting Samuel Johnson “Nothing will ever be achieved if first all possible objections must be overcome”, noted the MET's remarkable ability to overcome the bureaucratic difficulties of working in Transylvania. She said: 'If only more people had the courage and tenacity to just go for it, the world would be a more beautiful and interesting place'. Dominic West then read poems by Mihai Eminescu, including Ode, Eve on the Hill, And if.., and Down Where the Lonely Poplars Grow. This event was supported by Alira - Wine of Romania

MET Chairman Jessica Douglas-Home addressed the Rotary Club of Shrewsbury who have adopted a Mihai Eminescu Trust/Shropshire partnership as their submission for a major International Rotary Club grant for 2014. The object is to support the teams of Shropshire craftsmen who have over a number of years provided invaluable expertise for the Trust's restoration programme under the leadership of Colin Richards. It would support a clean water project in Malancrav where increased demand has resulted in an unprecedented depletion of the aquifer, and there would be essential funding for repairs to the second tower in the citadel wall adjacent to the MET office in Sighisoara.

MET Trustee, Dr Noel Malcolm, has been appointed a Knight Bachelor in the 2014 New Year's Honours List in recognition of his work on the political philosopher Thomas Hobbes; his scholarship in the field of the cultures, languages, and politics of Eastern Europe; his lectures on Western relations with Islam; and his political journalism. Subpages (2): LEIGHTON HOUSE Robin Lane Fox - Crocus Banaticus UK Registered Charity No: 1107300