ROBIN LANE FOX ON THE TRAIL OF TRANSYLVANIA’S ELUSIVE CROCUS 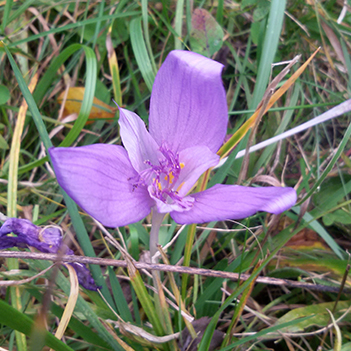 He writes: '...In idyllic east European sunshine, I have been focusing on a crocus. ...I recommend this sort of floral tourism, mine was aimed at crocus banaticus... The base-camps for our adventures were Saxon houses restored since 1995 by the celebrated Mihai Eminescu trust. Its rentable properties range from double-fronted village houses to two fine manors at Richis and Malancrav with tempting libraries and rooms for up to nine guests. We began in the Saxon heartland of Viscri....' To read the full text of Robin Lane Fox's article: more

We were in ‘Between the Woods and the Water’ land, not ‘In a Time of Gifts’, but it felt as though everyone in Romania was conspiring to give us a wonderful time, and the Trust was the spark which set the villages and hills ablaze! Thank you so much for all your kindnesses and magnificent organisation, which were all possible, of course, as a result of so many years. The beauty and completion of the villages, and of course the churches, in Viscri And Alma Vii was astounding and the scale of the entire operation was belied by the brilliance of detail in every house. I’ve rarely seen such beautifully comfortable rooms, and the detail of ceramic stone, white on white embroidery, and - most comforting of all – a selection of absolutely unmissable books, concentated on with intense contentment. Breakfast and supper were wholesome feasts without exception, and you would never have suspected how lamentable we were at timekeeping and map-reading had you seen the kindness of our hostesses. It was shamefully undeserved. Finally, a night of splendour in the guesthouse in Richis and to learn a little about what lay behind the panels and miraculously preserved walls that we had been admiring. I’m incredibly grateful to have seen it; fantastically grateful to have had it explained; by Andrea, by Carolina and others. It seems incredible that it exists, and as I see more of the domestic architecture of Turkey being destroyed to make way for faceless concrete and …..….., it is a comfort to believe that someone at some point, may preserve it.

THE OPENING OF No 119 RICHIS AFTER RESTORATION 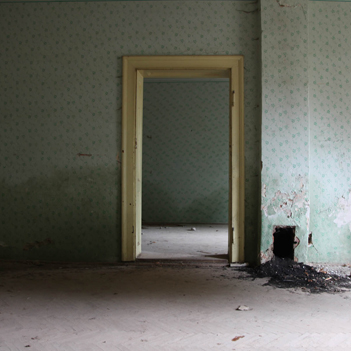 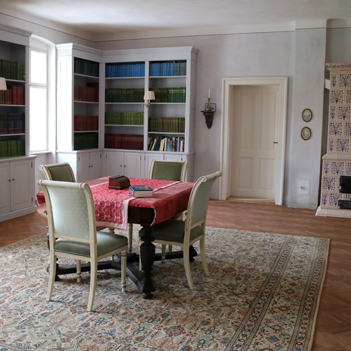 The library before and after restoration (Photos: Tessa Traeger and MET)

No 119 Richis had belonged to the Saxon Transylvanian grandfather of Herr Willi Untsch, who still lives in the village. In 1947 it was appropriated by the Communist government and began its descent into near total collapse. With the help of the Mihai Eminescu Trust architect Noemi Simo, project manager Alexandru Neagru and the Richis master builder Rares, the house is now restored as a guesthouse. After short talks in the library by Caroline Fernolend and Jessica Douglas-Home who explained the restoration process practiced by the Trust over the last 20 years, the day ended with a concert by a string quartet from Tirgu Mures who played Beethoven. 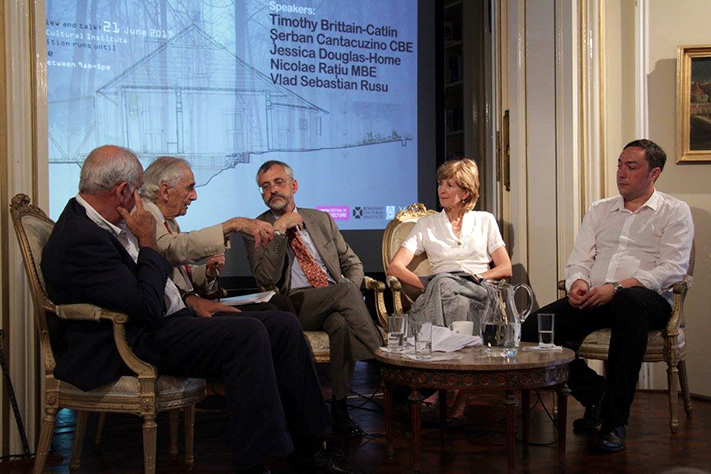 As part of its London Festival of Architecture, the Romanian Cultural Institute hosted a round table discussion, the theme drawn from the words of John Ruskin ‘The greatest glory of a building is not in its stones, nor in its gold. Its glory is in its Age’. The speakers were MET chairman Jessica Douglas-Home, architects Vlad Sebastian Rusu and Șerban Cantacuzino, and Pro Patrimonio founder Nicolae Rațiu, the discussion was chaired by Dr Timothy Brittain-Catlin. The festival exhibition at the RCI gallery in Belgrave Square, features a selection of outstanding Romanian conservation projects, including the MET’s restoration of the Saxon church in Alma Vii, the Apafi Manor and the Trust’s most recent restoration, the house in Richis. 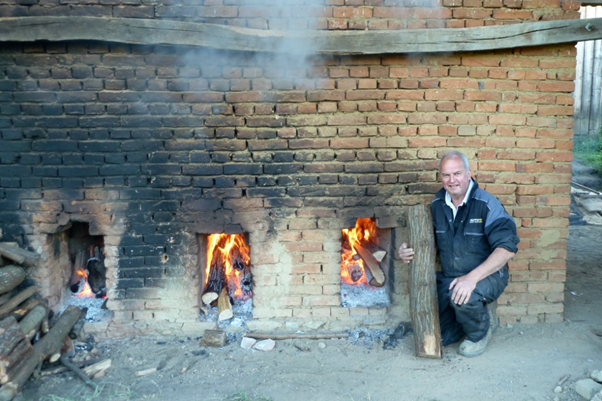 Colin Richards helping to fire the brick kiln in Malancrav

The theme of Colin Richard's address to students and invited guests at Bucharest's "Ion Mincu" University of Architecture and Planning, was 'pragmatic conservation'. He placed considerable emphasis on the fact that central to the design and execution of all MET projects are the needs of the villagers and, whenever possible, the active participation of all those who will benefit. He cited the construction of the brick and tile kilns in Viscri and Malancrav, repairing the citadel walls in Sighisoara, and the many projects in Alma Vii, where UK craftsmen have worked alongside villagers. The aim is to share skills and expertise, enabling local people to expand their employment opportunities and, at the same time, safeguarding their unique Transylvanian built heritage. The British Council and the British Embassy have expressed great interest in the next partnership project between MET and Colin Richard's team of Shropshire craftsmen and students, the proposal is to restore and renovate a fine set of traditional farm buildings in Archita, for community meetings and social events. 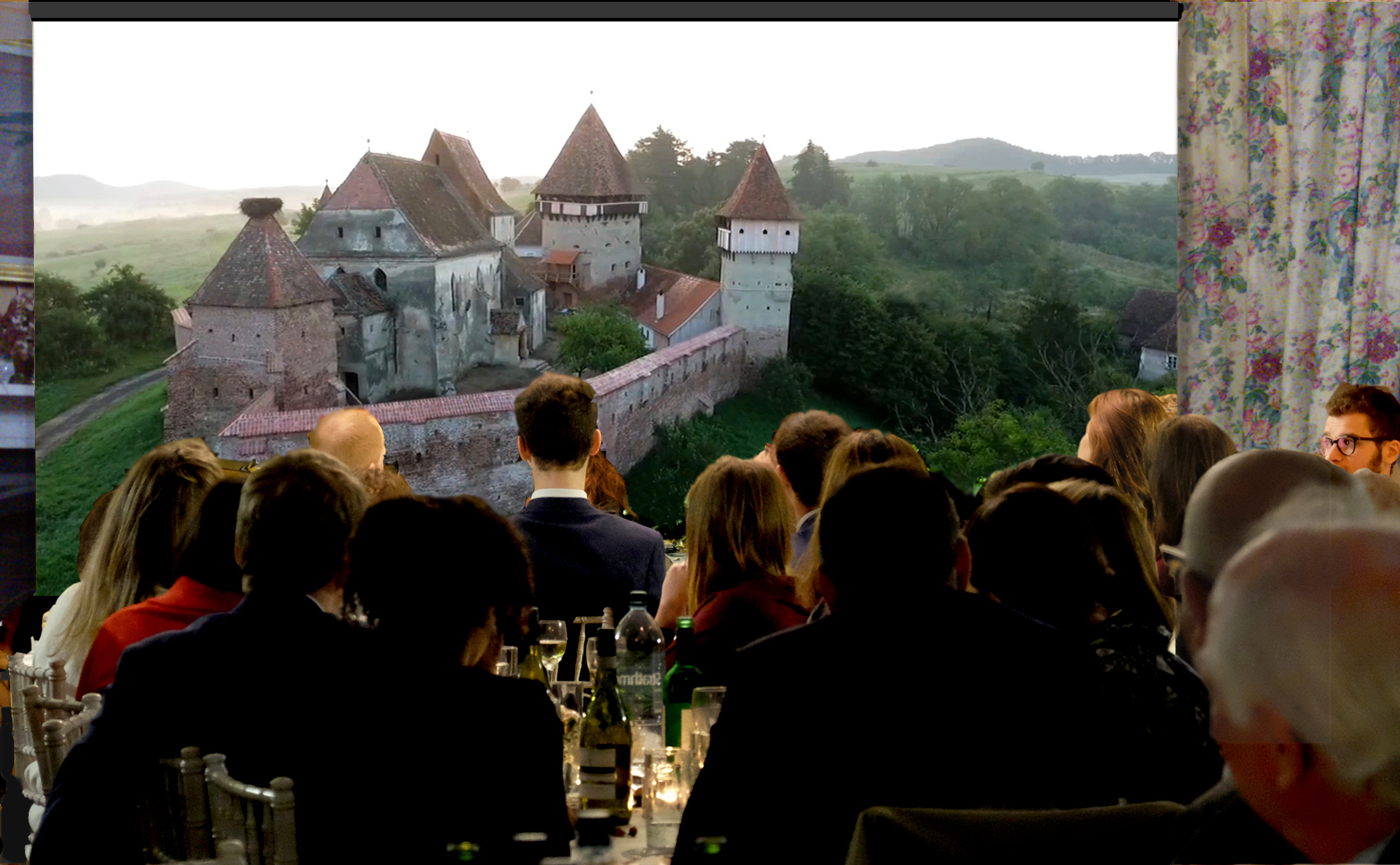 A supper and a film screening was held at the London home of Jessica Douglas-Home to celebrate the completion of restoration work by the MET on Alma Vii’s magnificent medieval citadel. Present was Richard Oldfield without whose considerable financial support the project would not have been possible. Also present were a number of new friends as well as long-standing friends of the trust. At the end of the film, Jeremy Amos (architect and MET trustee) spoke of the exacting detail of the two-year restoration and, at times, the almost impossible difficulties of seeing the project through. It was he said the largest ever restoration undertaken by the Trust. He described the final result as a triumph and noted the considerable beneficial effect this restoration has had on the lives of the people of the village.

An annual celebration for the Friends of the Trust was held at Leighton House, former home of the Victorian artist Frederic, Lord Leighton. The House which contains a fascinating collection of paintings and sculpture by Leighton as well as textiles, pottery and other objects from his travels to Turkey, Egypt and Syria provided an ideal background in which to reflect on the the work of the Mihai Eminescu Trust. Speakers included David Campbell (publisher of Everyman's Library), Jeremy Musson (architectural historian, historic buildings consultant, writer and broadcaster), Daniel Robbins (Senior Curator, Leighton House Museum) and Jessica Douglas-Home (Chairman, Mihai Eminescu Trust). An extract from Jeremy Musson’s speech at the MET celebration: "...What beguiles and intrigues me most in these Saxon villages is the almost mystical connection between old houses and the landscape, nature and agriculture; the significance of the trust’s work on these houses and churches, lies in their relationship to the communities together: it lies in the importance of LIFE in these buildings, and the buildings in the LIFE of people. Old houses, wherever they are, provide the historical story of a place and the survival and often the revival of communities, and immediately and without effort become part of the future of a place – this should happen naturally but can often take considerable effort." To read an extended version of Jeremy Musson's speech, see: Leighton House